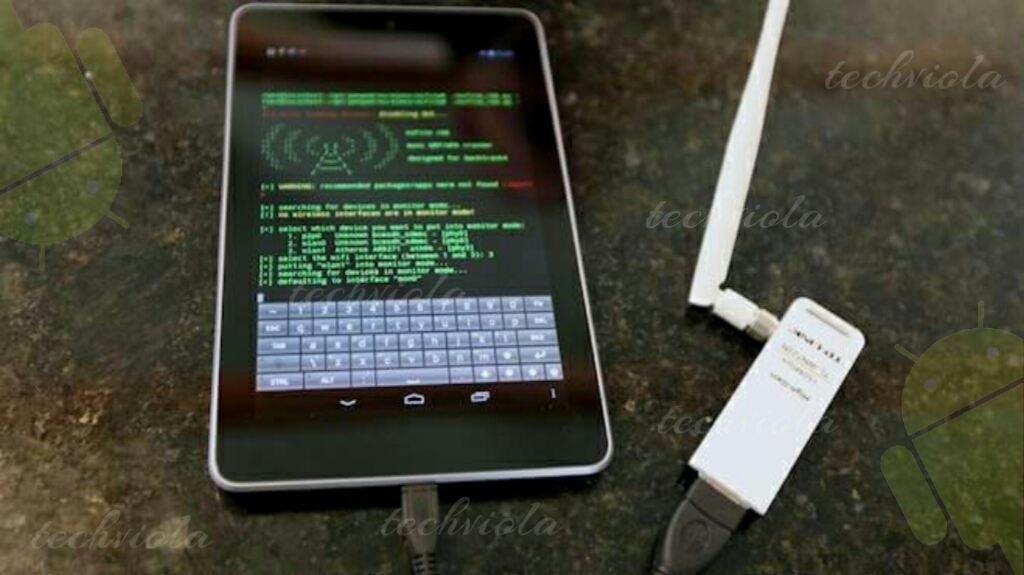 We’re rounding up the best Ethical and WiFi hacking apps or tools for android. Thus if you’re a script kiddie or a professional, then this apps should be what you ought to use for an intense hacking.

Android has always been the very best powerful operating system backed up with lot’s of tools that can ensure the continuity of it’s existence. Perhaps the open source capabilities was actually what triggered it’s popularity. There are numerous number of apps that can painlessly fill in your scanty device. Been a hacker or if perhaps you’ve got interest in hacking, then there’s a huge possibility that you’d need some hacking apps or tools installed on your android device in other to perform some stealthy task.

Also Read: How To Install and Run Kali Linux On Your Android Phone.

While knowing all this, we geeks over here at techviola decided to storm the Google playstore and after our deep exploration, we’ve benchmarked the best ethical hacking apps strictly for your android device to help you perform some testing purposes. With the right hacking apps or tools, there’s no limit to what you can achieve and how experience you’ve got to be once you make those apps your daily usage. So if you’ve got your device and brains ready, let’s hunt some of the best hacking apps for Android device. 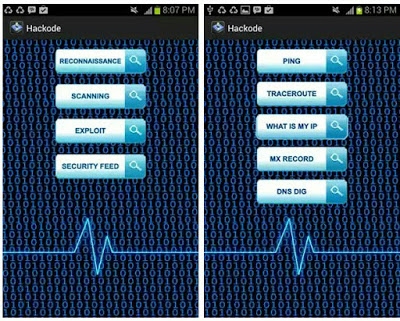 Hackode is one of the best hacker’s toolbox application for android which are mostly used by penetration tester, ethical hackers,IT administrator and Cyber security professional to perform different tasks like reconnaissance, scanning performing exploits etc. The application contains various kind of tools such as Google hacking, scanning, ping, DNS Dig, IP and much more. While this application is still in it’s beta version, there’s no doubt that it works perfectly with lots of utilities included. Currently over 500 thousand people downloaded hackode from the Google playstore. 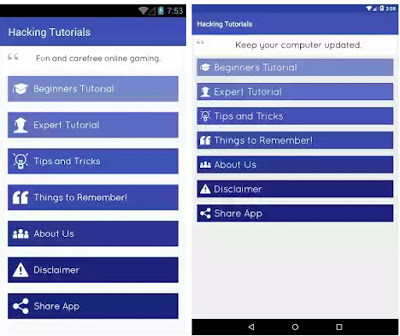 Ethical hacking is also one of the best android app that tutors beginners as well as experts on how to hack with some task involved. The app clearly explained the basic concept of hacking such as black hat, bot, cracker, phishing etc. that can help guide you through.This app displays the easiest and most efficient ways to safely perform any kind of hack, how it works, and most importantly how to protect yourself against them. It’s the best so far and probably worth a try. Currently over 100 thousand people downloaded ethical hacking from the Google playstore. 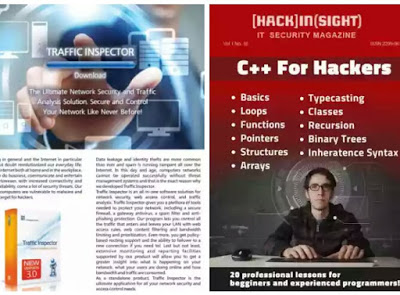 C++ for hacker is yet another most intense and probably one if the best hacking tool for android. The app is highly recommended for everyone, even if you’ve never programmed before or if you have extensive experience programming in other languages and want to expand into C++, then this app is for everyone who wants the feeling of accomplishment from a working program. It’s workability has never been doubted and also it’s one of the most rated app. Currently over 100 thousand people downloaded C++ for hacker from the Google playstore. 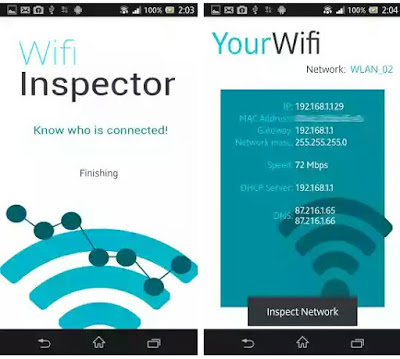 WiFi inspector is another popular hacking app for android. It’s a simple tool that permits you to see all the devices connected to your network both wired and WiFi, whether consoles, TVs, phones etc. Thus giving relevant data such as IP address, manufacturer, device name and MacAddress. Wifi Inspector also allows you to save a list of known devices with custom name and find intruders in less than 30 seconds. This makes it easier for hackers and you will not need to go checking the data whenever you make a scan. Currently over 1 million people downloaded WiFi inspector from the Google playstore. 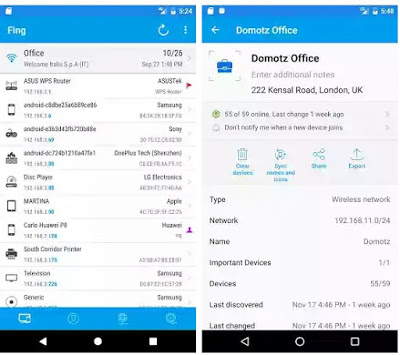 Fing is one of the  super-fast network scanner, that’s used by millions of homes and professionals around the world. Just like WiFi inspector, the app let’s you discover device which are connected to any Wi-Fi network. The app is the best utility tool you should have on your android device. Some of the utility tools fing brings are Wi-Fi scanner, port scanner, DNS lookup, ping and service monitoring. I am actually not a script kiddie, however fing comes of great handy to me once in every blue moon. It’s one of the best and a must-have. Currently over 1 million people downloaded fing from the Google playstore. 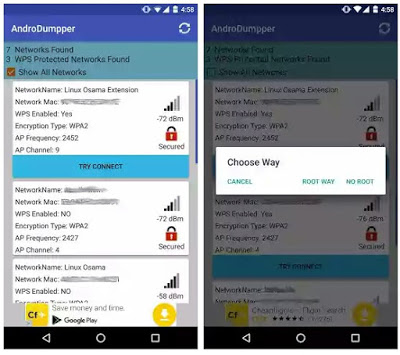 AndroDumpper is undoubtedly one of the most rated and popular hacking tool for android device. The app has been designed to strictly help you test your WiFi from WPS vulnerability. The app works conviently and has a simple user interface. AndroDumpper main purpose is to try to connect to WPS enabled Wifi Routers that have WPS vulnerability using some algorithms to connect to the Wifi. The app works both on rooted and non-rooted android device. However certain features are limited if perhaps your device isn’t rooted. Currently over 5 million people downloaded androdummper from the Google playstore. 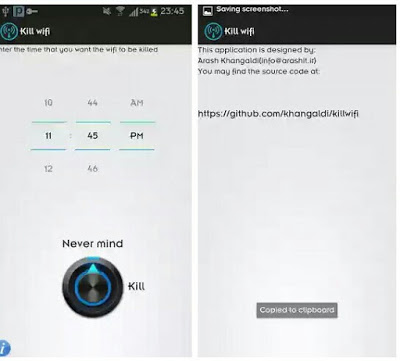 Kill WiFi is one of the ethical hacking app for android. The app is an simple open source application that kills wifi when you set the time for it. Thus is rather useful and can come of great handy when you need it most. You can painless Kill your WiFi after the download is done or whenever you want to save battery life time and bandwidth. Currently over 100 thousand people downloaded kill WiFi from the Google playstore. 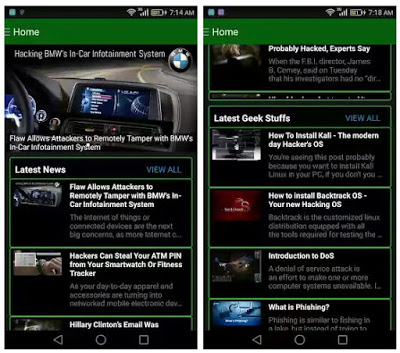 Geek App is one of the best hacking tool you should consider having on your android device. The app contains a step by step guide that explains different hacking techniques and keeps you updated with latest technology news. This application is equipped with picture and videos for your better understanding. Also, apart from other applications, there is a “Beginner” level which will help you to kick start your journey without much difficulties. So if you are following the tutorials from the “Beginner” Level, you will not get stuck in the middle. Currently over 1 million people downloaded geek app from the Google playstore. 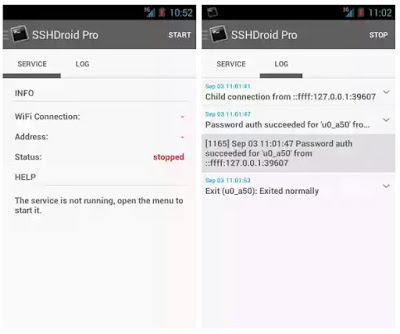 The last but not the least!. SSHDroid is a SSH server implementation for Android device. This application will let you connect to your device from a PC and execute commands (like “terminal” and “adb shell”) or edit files (through SFTP, WinSCP, Cyberduck, etc…). It’s one of the best hacking tool I can’t let go ever since I discovered it. While using this app, you might consider upgrading to the pro version to enable more advanced features such as extended notification controls, shared-key authentication, WiFi autostart whitelist,Automation with intents support and AdFree. Currently over 500 thousand people downloaded SSH droid from the Google playstore.

Guess we’re up and gonna! If perhaps you’re a script kiddie (an unskilled individual who uses scripts or programs developed by others to attack computer systems, networks and deface websites.) Or even a professional, then the above listed ethical hacking apps for android can actually be what you’ve been looking for. However it should be noted that the above hacking apps are only for educational and testing purposes. Thus never you try to hack someone network or privacy without his or her authorization.

How To Recover Deleted Files, Photos and Videos On Android

How To Convert User Apps To System Apps On Android