Home How To How To Get iOS Control Center On Android

How To Get iOS Control Center On Android 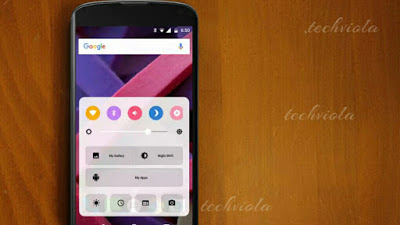 The Android notification shade brings tons of quick settings option that comes in handy for variety of purpose. However the customization ability is limited if you don’t have root access. With a smartphone that has a large screen, accessing the quick settings via the notification panel can actually be a hassle. One thing i noticed on the jellybean device is that there’s no possibility to access the quick settings while performing task like gaming. This is exactly where the control center proves to come in handy.

Also Read: How To Make Your Android Look & Feel Like An iPhone.

If perhaps you’re playing a full screen game, want to toggle internet or control a music player without even pausing the game? Then the control center can be off help. iOS control center is an overlay panel which can be accessed from anywhere in your mobile. Its very intuitive to use and gives you the ability to just swipe up to bring toggle controls options for various functions of your phone. Now the good news is that there’s actually a way to bring the iOS like control center on your android device with some pretty cool android apps.

Control Panel can bring the iOS like control center on your android phone without any hassle. However while the app tends to come of essence, i do say it’s pretty outdated but it’s functionality is as better as always. Control panel mimics the iOS 9 flat design and offers various toggles such as Wi-Fi, data connection, brightness slider, airplane mode, Bluetooth, screen timeout, GPS, music playback control and other various shortcuts. 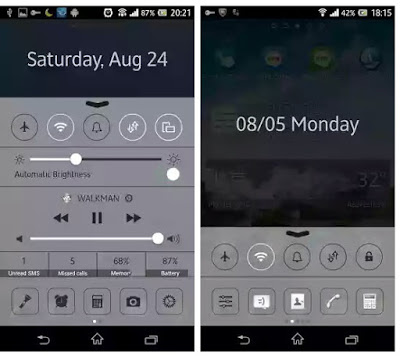 Apart from this, the app can show you the info of your CPU, memory, storage and battery display. The customization options includes the ability to customize the touchable area, rearrange the toggles and change the background transparency & color. Overall control panel brings tons of smart features and i personally recommend it to you because its simplified and works without complications .

Among all the various apps that mimics the iOS control center on android, quick control panel is the most redefined and classic app. Just like in the iOS device, the quick control panel can be accessed from the bottom of the screen. Other than this, Quick Control Panel is a highly customizable panel which provides quick access to frequently used toggles like mobile data, Wi-Fi, flashlight and other.

The app brings smart features and provides quick access to the respective settings which can be done by long pressing on a toggle. It also brings a music playback control, application shortcuts and moreover it can be opened on the lockscreen. Overall, quick control panel brings a material design implementation control panel on android and you can fine tune the app to suit your needs.

iPanel is a highly customizable control center which gives you quick access to switch settings and launch apps directly on your android device. This app can painlessly bring the iOS control center on your device without any difficulty. iPanel offers various toggles and you can swipe up from the screen to perform task like switch to Airplane mode, turn Wi-Fi on or off, or adjust the brightness of your display. 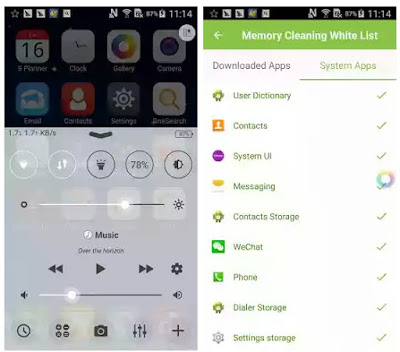 You can even use the new flashlight to shine lights on objects, quickly access your timer, calculator, and camera. iPanel also support music playback and brings tons of customization options. Overall iPanel gives you one-swipe access to the things you often want to do on a moment’s notice. It’s definitely worth a try.

The last but not the least! While surfing the internet, i stumble upon this app and it has done a great deed for me. If perhaps you want to get the iOS 10 control center on your android device, then OS 10 control center Pro can help you achieve that. As you’ve already known, the control centre in the iPhone has a variety of options and are rendered to be useful to lot of people. 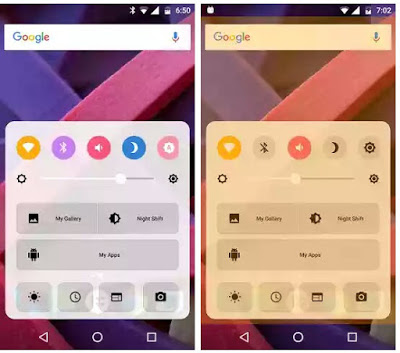 Now with the iOS 10 styled control center, you will get the power of the iPhone control centre to all the android device you’ve owned. The app has both the free and Pro version whereas you get more advance features on the “Pro” such as night mode, music player, screen brightness and a notification panel which shows all your notifications. It’s a great app and you’ve to give it a shot.

I am recommending smart controller as a “bonus tip”. Smart controller has features that the control panel brings. It unveils a music controller, which supports most of the popular music players, It is also a powerful and easy-to-use assitive system tool, which supports to configure most of the android functions. You can call it out at anytime during the use of your phone just by one click or gesture slide. 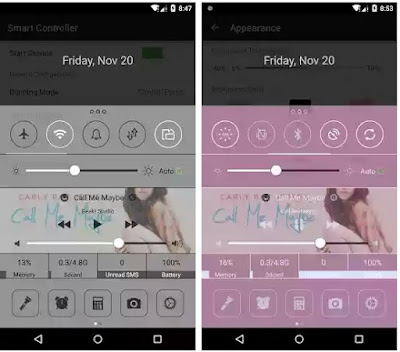 The app provides so many running modes including Control Center and Assitive touch. The app allows you to customize the shortcuts and operation style. It also supports toggles for most of the android configurations, including WIFI, ringer mode, Bluetooth, vibration, GPS, brightness, data connection, rotation, volume, airplane mode, WIFI hotspot and etc. Overall it’s one of the best app that can bring iOS like control center on your android device since it features one click to clean memory and boost game.

The Google Android and the Apple iPhone has come to be competitive in terms of various functions. However with a little knowledge, you can painlessly get most of the iOS features on your android device without any hassle whatsoever. With the above listed apps, getting the iOS control center on your android device can be a step away.

How To Lock Individual Apps On Android With Your Face