It’s been almost a year since the launch of Overwatch, and it’s still considered as one of the best team-based multiplayer online first person shooter game. Overwatch sets its cause in a war-torn world, where crisis was rampant. Heroes banded together to protect the world and maintain peace. After Overwatch’s influence got waned, conflicts started rising across the world. Hence the disbanded heroes has been called to protect the world again. Overwatch’s initial debut received lots of acclaim from critics, with its cartoonist art style, accessibility and diverse appeal of its hero characters. Now if you’re depressed with Overwatch’s competitive mode, here are the best games like to Overwatch. Want a cool game like Overwatch? Then Paladin: Champions of the Realm should be your go for. Paladin starts of in a world of ancient technology, players are bound to rely on strategy elements, team work and coordination in other to attain victory. Just like Overwatch, Paladins brings a similar team-based first person shooter experience but the major difference is that it utilizes a unique collectible cards system to amplify and augment a character’s innermost set of abilities to play exactly like they want. The deep customization, map type & game style in Paladins sets it aside from been a replica of Overwatch. Paladins is available on Xbox One, Windows, PS4 and macOS. 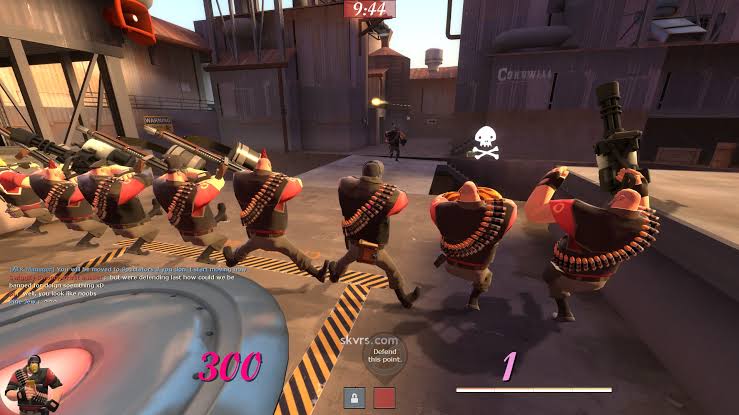 Team fortress 2 (TF2) is another team-based multiplayer first person shooter game that’s similar to Overwatch. It’s fiction focuses around two opposing teams in a combat-based objective, the teams are composed of mercenaries hired by two feuding brothers to protect the company’s assets belonging to one brother while trying to destroy that of the other. Team fortress 2 allows players to choose between 9 character classes, with a broad range of tactical abilities, weapons and hats. TF2 brings stunning cartoon like visuals, and it relies heavily on strategy and teamwork with variety of different game modes including king of the hill, capture the flag and payload. Team fortress 2 is available on Windows, Xbox 360, PS3, OSX and Linux. 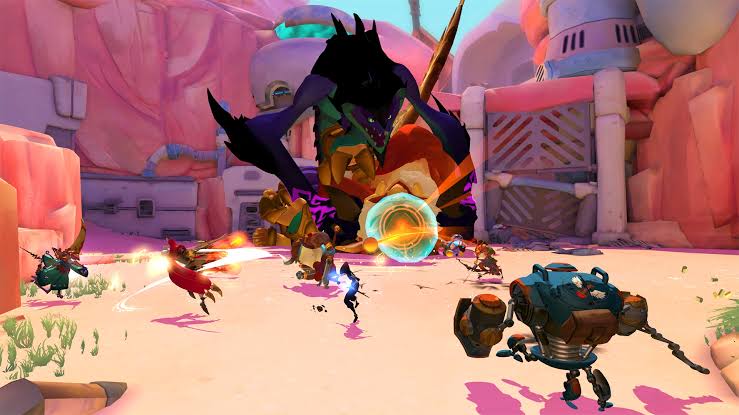 Gigantic is a ‘five players’ strategic hero shooter game that focuses on team based action combat as seen in Overwatch. The game begins with heroes battling alongside a magical behemoth known as a guardian, with the goal of destroying the opposing team and their guardian while protecting yours. Gigantic comprises a ‘mixture’ of MOBA features, with 20 playable heroes to choose from and they all have a wide variety of abilities. Unlike Overwatch’s first person shooter gameplay style, Gigantic is a third-person perspective game with fast and fluid experience. The game is currently available on Xbox one and Windows. 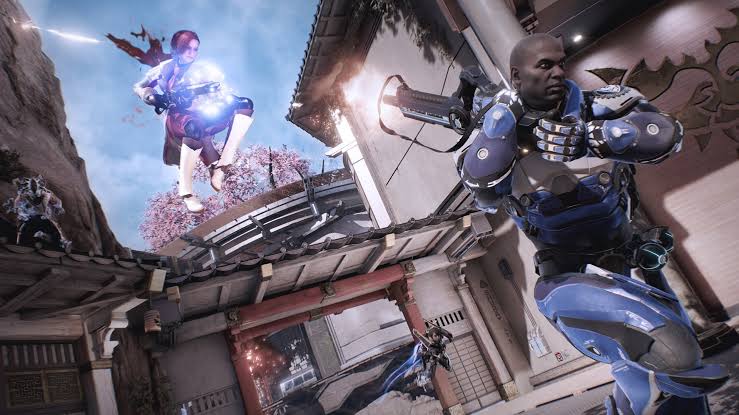 LawBreakers is another new team-like first-person multiplayer shooter games that’s a lot similar to Overwatch. The game focuses on two teams of five players, and they must work together to complete the objective of the match. One side of the team plays as the ‘Law’, and the other side plays as ‘Breakers’. LawBreakers brings a variety of different game modes such as overcharge, turf war, blitzball, occupy & roles. During gameplay, players can shoot, grapple and slice while delivering death from every angle. It’s really a fun game, and quite similar to Overwatch competitive team based strategy experience. LawBreakers is available on Windows and PlayStation 4. Dirty Bomb, formerly known as extraction is another team based first person shooter multiplayer game set in ‘London’ after a radiological attack. The main objective is to repair and escort an extraction vehicle to a predetermined location, or to plant a C4 charge on a certain target. Objective varies from map to map, and there are times when the attacker’s goal is to steal data or drug sample from the defending team and deliver them to a helicopter or other areas. During dirty bomb’s gameplay, players are placed on one of two teams, either “Jackal or CDA”. The game encourages teamwork, as being a “lone wolf” can lead to death. Players can choose mercenaries, with a ranked game mode option that uses the rule of stopwatch. Dirty Bomb is similar to Overwatch and it’s available on Windows. 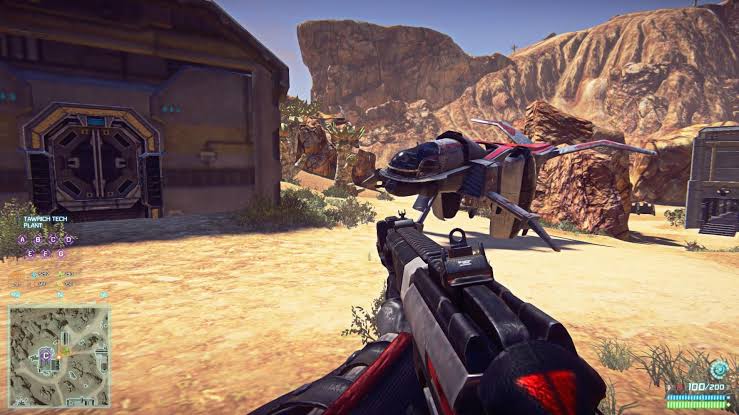 PlanetSide 2 is a massive and fast-pased multiplayer ‘online’ first-person shooter game that took place on the continents of Auraxis where thousands of players battle in as one in a strategic targeted mission against opposing empires for territorial control. The game start of in an open-world large battle featuring up to 2000 players per continent, and one of its important aspect is that players skill and teamwork are a major determiner when it comes to being able to kill opposing teams. PlanetSide 2 is quite similar to Overwatch, and it utilizes infantry, air and ground vehicles to destroy enemies. It also features a day and night cycle, and variety of different factions including terran republic and vanu sovereignty. PlanetSide 2 is available on Microsoft Windows and PlayStation 4. Battleborn is a heroic​ first-person shooter game with elements of multiplayer online battle arena (MOBA). The game tells a tale of a tremendous band of badass heroes, whose main goal is to fight and protect the universe very last star from a mysterious evil. During gameplay, players are allowed to select from one of several pre-designed characters with different skills, attacks and power. Battleborn​ exhibits a cooperative & competitive match that’s quite similar to Overwatch, but the game does a poor job in explaining the complex difficulties​. However its team-based competitive gameplay and a 5v5 matches can be experienced by up to 10 players. Battleborn is currently available on Microsoft Windows, PlayStation 4 and Xbox One. 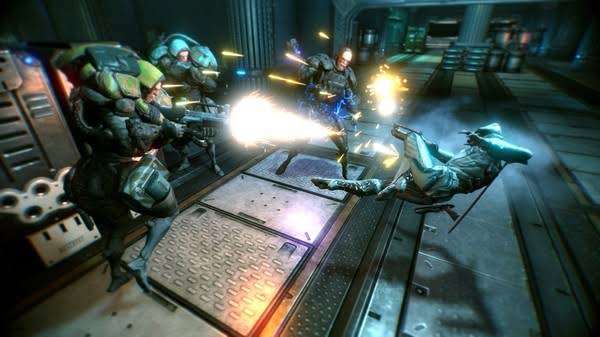 Warframe is a free-to-play cooperative third person multiplayer online shooter game set in an evolving sci-fi world. The gameplay narrates a story of an ancient warriors in Tenno, after being awoken from centuries of cryosleep they find themselves at war with the Grinner, and they must fight to defeat the opposing faction. Players are equipped with three weapons during gameplay, and they include a primary, secondary and a melee weapon. Warframe possesses a team-based cooperation, as up to four players are allowed to work together to complete missions such as assassinating dangerous targets and retrieving data from terminals. Warframe’s gameplay style is similar to Overwatch, and it is available on Windows, PS4, Xbox One. 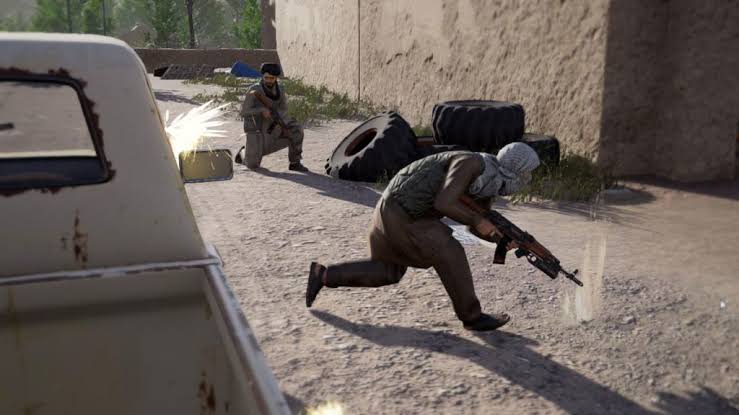 Squad is a 50 vs 50 multiplayer online first-person shooter game similar to Overwatch. The game features infantry combat, and it includes various armored and unarmored land based vehicles, couple with large scale environment, base building and integrated positional VoIP for proximity talking and radio available for players and squads to use. Squad’s main goal is to capture combat realism through cooperation, teamplay and communication. Hence high level of teamwork are crucial to success and survival in this team-based military fps game. Squad fluid gameplay is detected by players, with real organic and emergent reigning supreme. Squad is currently available on Microsoft Windows. 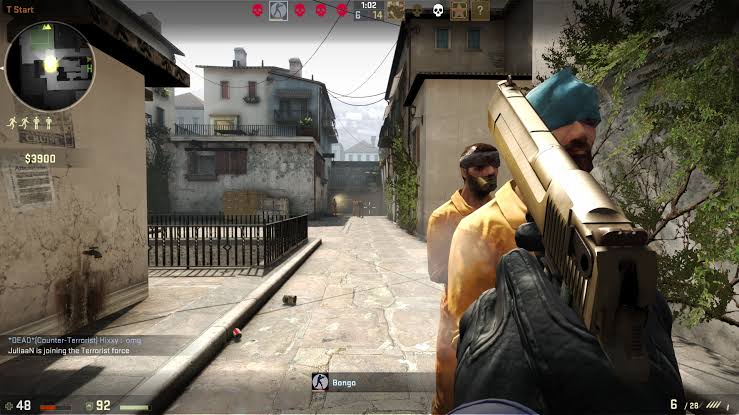 Counter-Strike: Global Offensive is another objective team-based action multiplayer  first-person shooter game that’s similar to Overwatch. The gameplay pits two teams (the terrorists and counter-terrorists) against each other. Each opposing team are tasked with separate objective and eliminating their opponents. For instance, the terroterrorists can secure a location to plant or defuse bombs while defending hostages, and the counter-terrorists on the other hand prevents the bomb from being planted, while rescuing hostages. CS: GO features six game modes and powerful weapons. The game highly recommends teamwork, in other to achieve success. Counter-Strike: Global offensive is available on Windows, PS3, Xbox 360, OS X and Linux.

There are dozens of team based competitive multiplayer online shooter games similar to Overwatch, including Vision Origin, Paragon, Titanfall 2, Blacklight, Plants vs. Zombie, Block N Load and Battlerite. The aforementioned games are our top recommendations and the best alternatives to Overwatch. So if you have got your gaming console ready, the above Overwatch like games are a must play!.